More on the lights 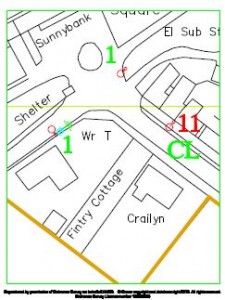 Scottish power have now fixed the fault but have left the lights burning 24hrs (so as to maintain lighting during the night). The lights will be on 24hrs until we agree on where the pillar is to go. The council asked about siting the pillar in the hedges as discussed below but they said that was a non-starter so they have suggested an alternative location which is shown on the attached map in turquoise (opposite the bus stop).. Let me know what you think.