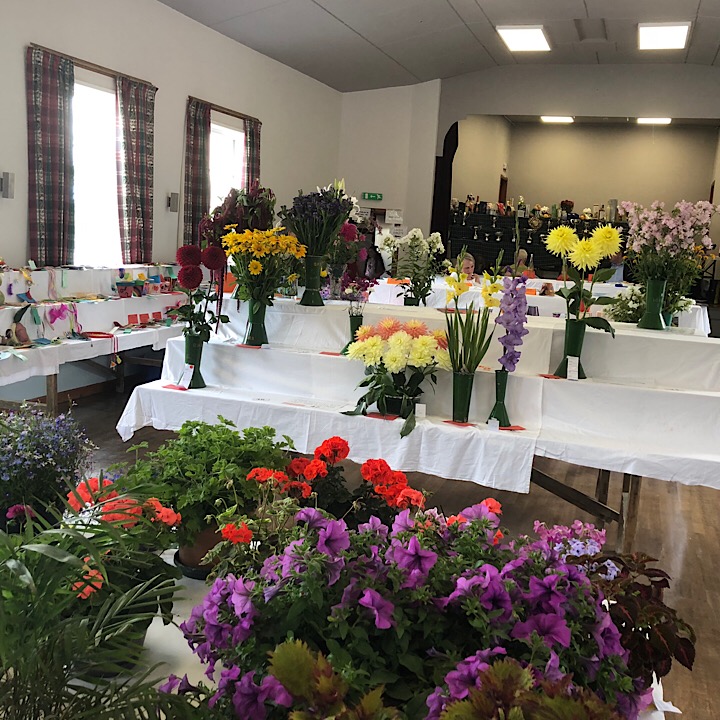 The Letham & District Horticultural Society’s 116th Annual Flower Show and Industrial Exhibition held on Saturday 16th August. had an encouraging 560 entries. Amazingly given the difficult weather conditions over the summer the entries were almost the same as last year (557)

Saturday turned out to be a fine day and a sunny afternoon brought out a good number of visitors.  That along with the large number of large number of items entered into the show by the exhibitors made it a very successful day.

It is always encouraging to see a large entry in the Children’s Section and this year was no exception with 136 entries.

In the under 5’s the most popular classes were some very imaginative colourful hand print paintings, pastanecklaces and the ever-popular cress grown in an egg cup.

In the 9-12 age group there was fierce competition between eight competitors with some very creativeedible creatures, colourful paintings of butterflies,beautiful dream catchers and tasty macaroon bars.

In the 13-16 age group there was some very goodartistic examples of entries with a really intricate sheep made out of modelling clay, some delicious millionaires shortbread, a decorated T shirt and an imaginative dream catcher decorated with sea shells.

In the open section for all age-groups, all the classes proved popular with the biggest entries being the decorated flower pot with 15 entries, next highest with 14 entries was the floating flower heads in a cereal bowl. There was a good entry in the photograph class with some very imaginative photos of different weather conditions. Appropriately for a flower show there were 7vegetables grown by a child class – so we have some budding gardeners of the future! Finally, the ever-popular miniature garden attracted a good number of entries with a wonderful range of ideas from the children.

Despite the difficult weather conditions this year there was a 40% increase in the number of entries to 103 inthe Vegetable Section. We have not had that level of entries since 2002! It was a very encouraging section with broad beans, French beans, potatoes and tomatoes being the most popular entries.

The Pot Plant section was popular with the more unusual exhibits of orchids, cacti and insectivorous plants being exhibited. There was also some beautiful fuchsia, colourful pelargonium and a huge display of vivid purple surfinia with the best exhibit being an outstanding begonia.

The Cut Flower section although down on last year showed a colourful array of gladioli, marigolds and fragrant sweet peas.

The floral theme continued in the Decorative Section which was well entered in every category with the competitors showing imaginative use of flowers and foliage in their displays including the ever-popular bowls of floating flower heads. There were very impressive novel arrangements of fresh flower arrangements inladles, beautiful table centre decorations on a Christmas theme and some very delicate miniature arrangements in thimbles.

In the Rural section, the theme was “Summer Picnic”and the ladies had certainly put their expert skills to full use with beautifully designed and imaginatively sewn picnic bags and napkins and colourful floral arrangements in tumblers. Edible entries consisted ofsavoury Scotch eggs and tasty flapjack.

The Handicrafts Section enjoyed an increase in the number of exhibits with similar number of entries in every class and they showed a range of practical and decorative skills. The more popular categories were a decorated flower pot, a child’s motif jumper, crocheted or knitted brooches and items of jewellery.

The Baking Section was however down on last year but still there was a good spread of delectable treats. Staples such as cheese scones, dropped scones and the set recipe for a courgette loaf were most popularwith sugary treats such as Victoria sponge, traybake and marzipan fruits also proving popular.

The Jams and Jellies had the highest number of entries per class with raspberry jam, rhubarb & ginger jam and marmalade being the most popular

Again, the weather appears to have been favourable to the fruit growers with a 50% increase in the number of fruit entries. All categories were well entered with blackcurrants and gooseberries being the most popular.

The theme for this year’s Photographic Section was “Farming Life” and proved popular with some wonderful photos of different aspects of farming life.

There was also a Vegetable and Fruit tombola with donations from Kettle Produce which was keenly supported by the visitors.

Outdoor games of putting, tub ball and horseshoe throwing proved popular with a large number of children and grown-up children alike with a large queue forming over the afternoon.

Afternoon teas were provided by the ladies in the kitchen who did a sterling job serving a steady flow of thirsty visitors.

Trophies were presented by Rev. Jeff Martin of Cupar Old and Monimail with Logan Reynolds presenting himwith a flowering plant as a thank you from the Society.

The Show was rounded off with an auction of exhibits that had been very kindly donated by the competitors thus ending what had been a very successful 116thShow.

Willie Fenton, on behalf of the Society, thanked all the competitors, helpers and visitors who made the Show possible and for making it such a success and encouraging everyone to come back next year.